(June 1, 2022 / JNS) Arizona Governor Doug Ducey is in Israel this week on a five-day trade mission with a delegation from Arizona focused on business development, water technology and border security. The delegation includes Danny Seiden, president of the Arizona Chamber of Commerce, and Sandra Watson, president and CEO of the Arizona Commerce Authority.

While the trip is focused on increasing trade and investment between Israel and Arizona, the governor also had the opportunity to visit some key religious, historical and cultural sites, including the Western Wall, the Tomb of the Patriarchs in Hebron, the Menachem Begin Heritage Center, and the City of David excavations. Ducey’s visit to the burial site of Abraham, Isaac, Jacob, Sarah, Rebecca and Leah in Hebron follows recent visits to Judaism’s second holiest site by former Vice President Mike Pence and the former Secretary of State Mike Pompeo.

During his stopover in Hebron, Ducey told JNS: “It’s great to be back in Israel. Arizona, he said, has a “wonderful” relationship with the Jewish state. “During the first year of my administration [2015] we came here and learned a lot about water and border security, about building a start-up state, and we tried to apply that to Arizona. It is therefore an economic mission that we carry out. We are looking for solutions to future water problems and Israel is always at the forefront.

Arizona Governor Doug Ducey visits the Western Wall in Jerusalem on May 29, 2022. Photo by Dudu Koren.

Additionally, Arizona is said to be the only U.S. state to have a dedicated full-time trade and investment office in Israel, which was established in 2019 under Ducey and is run by Tel Aviv-based Israeli-American entrepreneur David Yaari. Arizona has a growing tech scene, with many Israeli companies choosing to establish bases in the Grand Canyon state rather than elsewhere on the West Coast.

With an arid climate similar to that of Israel, the governor is particularly interested in Israeli agri-technology, with the aim of replicating Israel’s work in water conservation and desalination.

The governor also led an American Memorial Day ceremony at Israel’s Living 9/11 Memorial Plaza, the only monument outside the United States that bears all the names of those killed in the 9/11 attacks. The ceremony was attended by US Ambassador to Israel Thomas Nides, US Military Attaché to Israel Brig. Gen. Shawn Harris and Consul General of Israel in the Southwest Pacific Hillel Newman.

“Being in Israel on Remembrance Day at the only memorial in the world [outside the U.S.] with all the names of everyone who perished that day, it certainly feels like Memorial Day here,” Ducey said.

“Being among our greatest allies and all the support they show for our nation is something really special. [Israel] is one of the nations that represents the light in the world, alongside the United States,” he added.

Ducey was in Jerusalem on Sunday as Israel celebrated Jerusalem Day. He tweeted: “Proud to be in Israel on Jerusalem Day marking 55e anniversary of the reunification of Jerusalem during the Six Day War in 1967. Jerusalem is the eternal and indivisible capital of Israel.

He added: “It was very special to be here on Jerusalem Day. There was real energy, patriotism and spirit, especially among the young people. 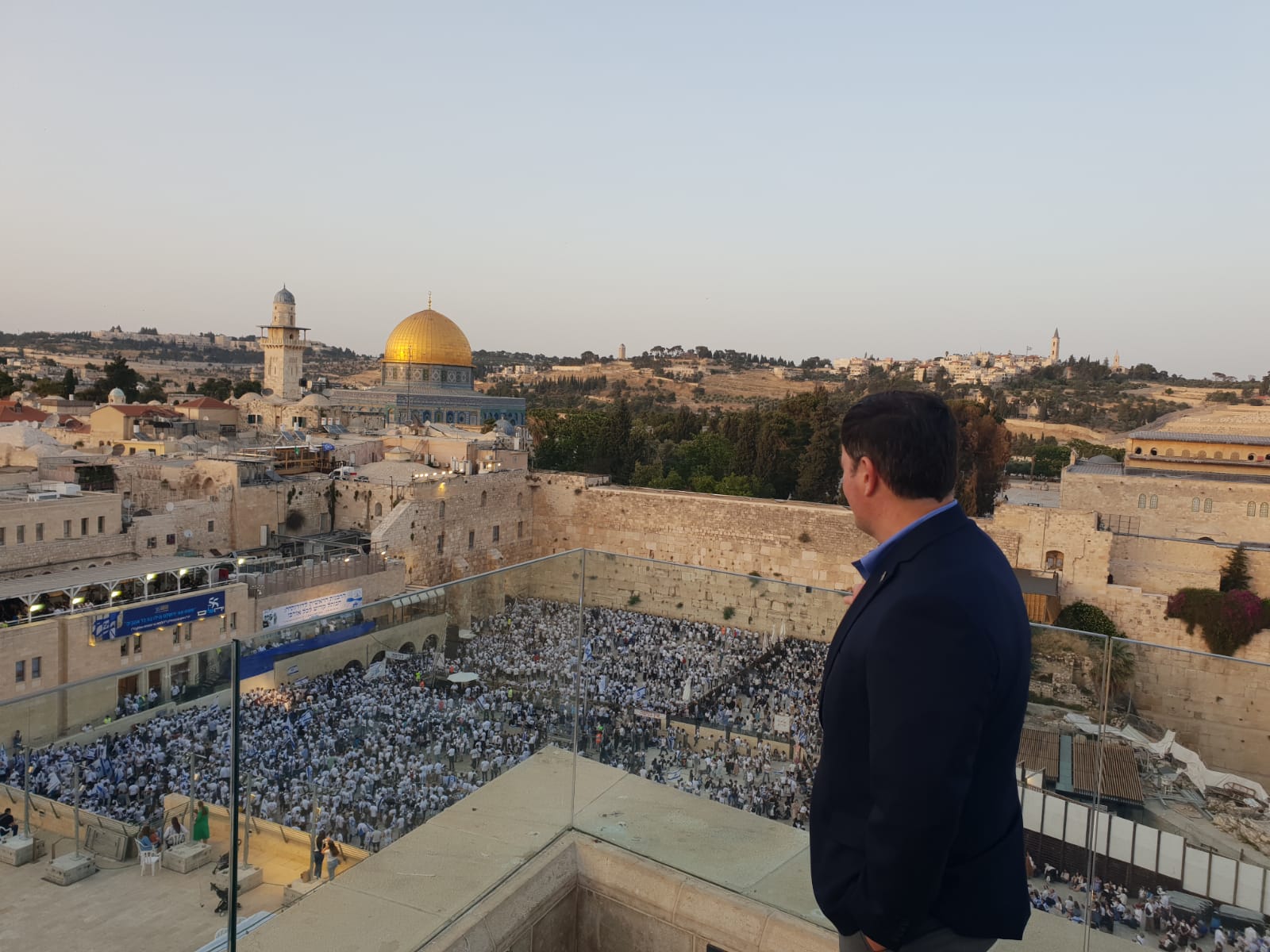 Consul General Newman, who was one of the main facilitators of Ducey’s visit, told JNS: “The Consulate General of Israel in Los Angeles was delighted to work with the Governor and his team to bring about this Governor’s visit, the Governor’s third visit to Israel.

Ducey, Newman added, “is one of the greatest friends of the State of Israel and the people of Israel, as evidenced by his many actions. Among them are his opening of a trade office in Israel, the divestment of Ben & Jerry’s, his many statements of support and his solidarity with Jerusalem Day.

Additionally, under Ducey’s tenure, Arizona adopted the International Holocaust Remembrance Alliance (IHRA) definition of anti-Semitism and made Holocaust education mandatory in state schools for students in grades seven through twelfth.

While in the Jewish state, Ducey also met with Israeli President Isaac Herzog, Prime Minister Naftali Bennett and former Prime Minister Benjamin Netanyahu. He was also recognized as a “Defender of Israel” by the Menachem Begin Heritage Center. 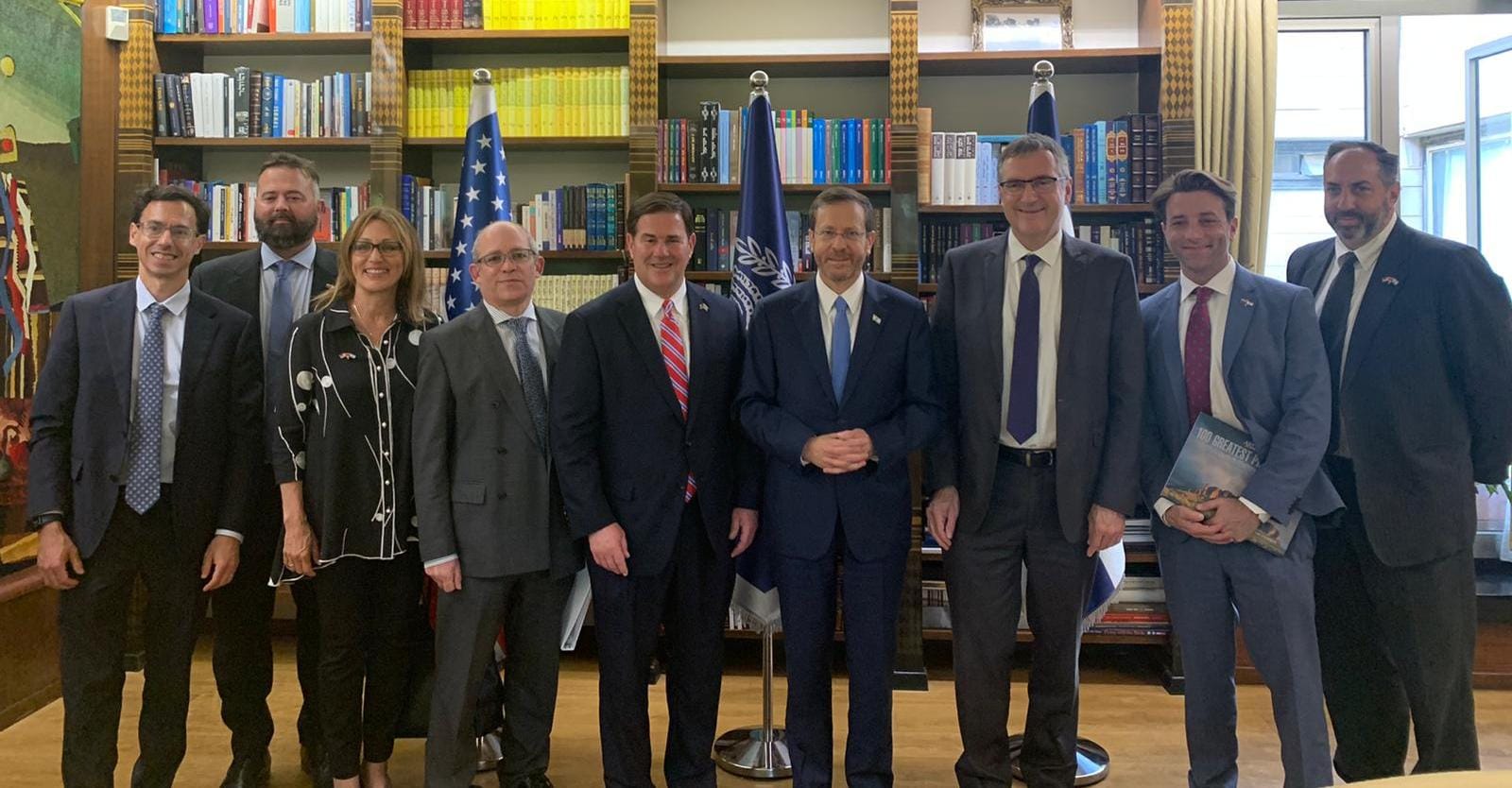 Arizona Governor Doug Ducey and members of the delegation meet with Israeli President Isaac Herzog in Jerusalem on May 29, 2022. Credit: GPO.