Today, China’s influential position in the global economy is indisputable

This article is based on the interview with Professor Rev. Wijithapure Wimalaratana Thero from the University of Colombo on “Rising China and Lessons for Sri Lanka”. The interview series was launched by Veemansa Initiative, an independent think tank in the areas of economic, political and social issues. Through this series of interviews, Veemansa brings the views of scholars and experts on various dimensions of China’s miraculous development experience, drawing lessons, parallels and perspectives for Sri Lanka.

In a short time, China has transformed into the most authoritarian economy in the world, while also becoming a militarily powerful and politically influential nation in the world. 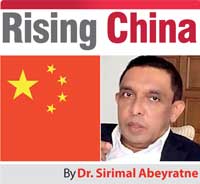 superpowers. When we try to understand China’s current economy, we must also understand it from a historical perspective.

There are important turning points of economic transformation in China’s modern development history. On October 1, 1949, Chinese Communist leader Mao Zedong declared the establishment of the People’s Republic of China (PRC) after a long struggle against the existing Republic of China regime. Since then, for nearly three decades, the economic path in China has been shaped by the communist regime.

The Great Leap Forward was a five-year plan of forced agricultural collectivization and rural industrialization that was instituted by the Chinese Communist Party in 1958-1962. While the five-year plan, which has not been abandoned even after the launch of market-oriented political reforms after Mao’s regime, has continued to exist until now; today, China is implementing its 14th five-year plan.

Another historical turning point in the transformation of modern China was the Cultural Revolution of 1966-1976. The purpose of the revolution was to impose communism and remove any foreign or capitalist influence as well as the traditional cultural traits of the rest within Chinese society itself.

When China joined the World Trade Organization (WTO) in 2001, it was still a minor player on the global manufacturing stage. But over the past 20 years it has grown rapidly to become the world’s second-largest economy, ousting Japan in 2010.

China in the global economy

Today, China’s influential position in the global economy is indisputable. It has the largest population in the world with 1.4 billion, followed by India, the United States and Indonesia. In terms of


geographical size, it is the fourth largest country in the world after Russia, Canada and the United States.

Although in nominal terms, China’s GDP is still lower than that of the United States, IMF data indicates that, according to PPP-adjusted GDP estimates, China has already become the largest economy. since 2014. PPP-adjusted GDP reflects differences between countries. in the purchasing power parity (PPP) of one US dollar.

China holds the largest stock of foreign exchange reserves in the world, amounting to $3.3 trillion. While the United States continues to have a trade deficit covered by foreign borrowing, China has been the largest lender to the United States. The value of Special Drawing Rights (SDRs) maintained by the IMF is determined by a basket of five major world currencies; the Chinese currency, the renminbi, was added to this basket as the fifth currency in 2016, while the other currencies are the US dollar, the euro, the Japanese yen and the pound sterling. China is the world’s largest food producer, the world’s largest industrial producer and the world’s largest industrial exporter.

China has a long history of innovation that dates back centuries. Gunpowder, paper and the compass are examples of some of the most influential Chinese inventions in history. The Great Wall of China is a historical monument considered one of the Seven Wonders of the World. The nation also mastered the silk industry and martial arts.

Historically, China was one of the world’s leading economic powers for most of the two millennia, from the 1st to the 19th century. Today, China has in fact regained its lost world power. The large size of the labor force which provided cheap labor in the early stages of development has been a major factor in attracting investment to China. The workforce is blessed with positive working attitudes, while the Chinese are hard workers. The well-known “996” is an abbreviated term used to describe their attitude towards the work schedule, which runs from 9 a.m. to 9 p.m. and six days a week.

China has a massive local market that provides enough space for industries to grow and expand, taking advantage of the low-cost benefits of economies of scale. However, China does not depend on its local market; the Chinese government is always pushing its local industries to enter the global market and even to invest and expand outside of China.

President Xi Jinping’s “One Belt, One Road” initiative in 2013 reflects China’s global vision. The term derives from the terrestrial “Silk Road Economic Belt” and the “21st Century Maritime Silk Road”, concepts introduced by the President. It was designed to improve connectivity and cooperation between countries in Asia, Africa and Europe for the future development of China and the global economy, with the aim of promoting trade and investment. and reduce poverty.

China is also a well-functioning society in the sense that there are no frictions that interfere with or limit economic growth. This element is linked to the country’s one-party political system which has not changed with the political reforms. The Chinese system is a new arrangement with market-oriented political reforms adopted within the existing communist-like political and administrative mechanisms. It has assured international investors of political and economic stability in the country through a consistent and predictable political and regulatory environment.

There are, however, also worrying factors that may be important to note in a discussion of the country’s miraculous economic development, which are territorial or geopolitical issues, including conflicts with Hong Kong and Taiwan. The South China Sea involves a wide range of complex issues covering sovereignty over islands and reefs, maritime delimitation, maritime security, cooperation against piracy and terrorism, resource development and environmental protection. .

Besides the above, environmental issues, political reforms and the future of the Chinese Communist Party, human rights and religious freedom, legal reforms, corruption and demographic issues have posed challenges for the Chinese government.

Under the Rubber-Rice Pact between China and Sri Lanka, signed in 1952, China generously offered for Sri Lankan rubber 40% above the market price and supplied rice to Sri Lanka at a third less than the market price. This generosity is a sign of friendship between the two countries, which has not been polluted so far.

To date, China has invested in establishing the port city of Colombo on reclaimed land, while expanding its investments in several other key economic sectors, including infrastructure, roads and electricity in Sri Lanka. China also lent its support to Sri Lanka when some other countries turned away to help win the separatist war and stood by Sri Lanka in difficult times.

This strong relationship between the two countries is an indication that Sri Lanka is in a competitive position to benefit not only from access to the Chinese market and tourism, but also in a much broader sense from Chinese economic development as well as its global expansion. .

(The author is a professor of economics at the University of Colombo who conducted the interview series on Rising China.)