The meeting between the Vietnamese Minister of Industry and Trade Nguyen Hong Dien and the Gabonese Minister of Trade Yves Fernand Manfoumbi in Hanoi on March 23. (Photo: VNA)

Hanoi (VNA) – Vietnam hopes Gabon will act as a bridge to help it expand trade relations with other countries in the central Africaand that the two sides will strengthen relations in industries in which they are strong, said Minister of Industry and Commerce Nguyen Hong Dien.

He made the remarks during a March 23 meeting with Gabon’s Trade Minister Yves Fernand Manfoumbi, who is joining a visiting economic and trade delegation from the Organization internationale de la Francophonie (OIF) led by Secretary general of the OIF, Louise Mushikiwabo.

Dien cited statistics showing that bilateral trade stood at around $63.5 million in 2021, up 22% from the previous year. This included $17.6 million of Vietnamese exports to and $45.9 million of imports from Gabon.

Despite the growth in trade, revenues still do not match the potential of both sides, he noted, adding that Vietnam mainly ships rice, plastic products, seafood, fruits and vegetables to the country. Gabon while purchasing timber, wood products, ores and minerals from the latest.

To harness the potential of the two countries and strengthen their economic and trade ties, the Vietnamese minister called for increased mutual visits at all levels and optimal conditions for businesses to meet directly when possible.

He also suggested Gabon prioritize the import of rice, medical supplies such as face masks and personal protective equipment, and other products from Vietnam. 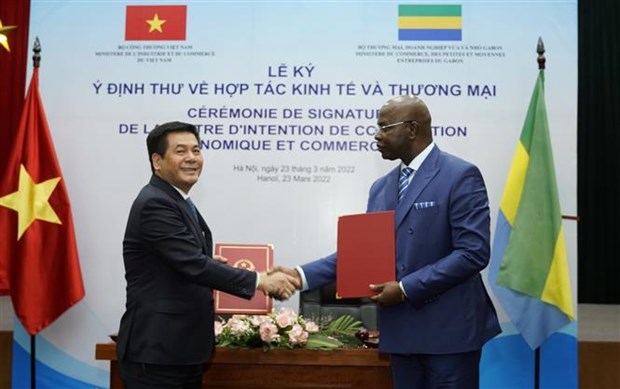 Hailing Gabon’s rich natural resources such as oil and manganese, Dien said it was an opportunity for the two countries to strengthen trade and investment ties, and that strengthening the partnership with the African nation also corresponded. Vietnam’s policy of diversifying export and import markets and materials. sources of supply for domestic manufacturing.

The Vietnamese Ministry of Industry and Trade will encourage companies to consider cooperation with Gabonese partners in areas such as oil and gas, food, textile-clothing, leather-shoes and mining industries, he added.

For his part, Manfoumbi invited the Vietnamese minister and companies to visit Gabon in July to explore opportunities for cooperation and investment in priority areas for his country.

He also stressed the need to activate cooperation activities at this stage to help the two countries accelerate economic recovery and post-pandemic development.

At the meeting, officials agreed to assign staff to discuss detailed coordination plans, including the possibility of signing a memorandum of understanding on the establishment of a joint task force.

The two ministers also signed a letter of intent on economic and trade cooperation between their ministries./.